Osteoporosis is a systemic bone disease characterized by decreased bone mass and increased brittleness caused by the damage of bone microstructure. With the aging of the world population, it has become a serious social problem. According to pharmacology, osteoporosis drugs are mainly bone resorption inhibitors and bone formation promoters.

Teriparatide is a recombinant human parathyroid hormone (PTH) analogue (rhpth[1-34]) composed of 34 amino acids. It can regulate bone metabolism, renal tubular reabsorption of calcium and phosphorus, and intestinal calcium absorption. It is suitable for the treatment of osteoporosis with high fracture risk in postmenopausal women and osteoporosis with high fracture risk induced by continuous glucocorticoid treatment

The amino acid sequence of teriparatide is composed of 34 conventional amino acids, with a large number of amino acids, forming a certain secondary structure. Fragment condensation strategy is adopted to reduce the preparation difficulty. The tripathide was divided into 4 fragments, 4 using Royal resin as the solid-phase carrier, and the other fragments using 2-clctc-resin as the solid-phase carrier to synthesize the peptide resin. After 1 ~ 3 peptide resins were cleaved to the fully protected peptide, they were successively condensed to the peptide resin according to the peptide sequence, Finally, after TFA cleavage, side chain protection group removal and purification, teriparatide (scheme1) was obtained. The purity was more than 99% and the overall yield was 33%. Its structure was confirmed by MS (ESI). This method shortens the synthesis cycle, simplifies the operation of solid-liquid phase synthesis, avoids the use of unconventional amino acids, and has a high yield, which is convenient for industrial production.

Purity: >98% (or refer to the Certificate of Analysis)

Solubility: Soluble in DMSO, not in water 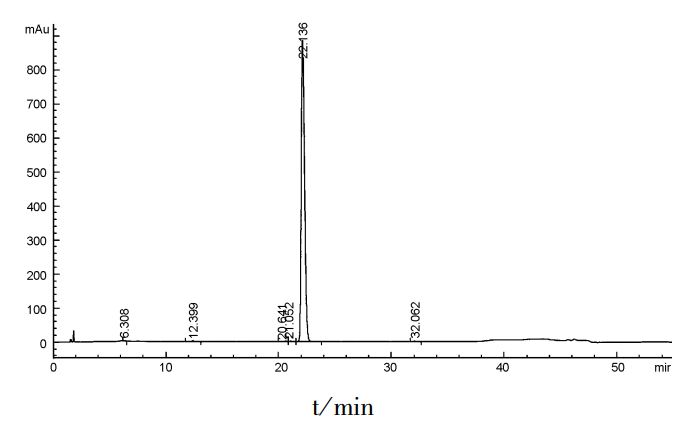