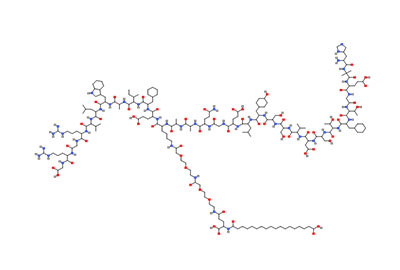 Semaglutide is a glucagon like peptide-1 (GLP-1) analogue, which promotes insulin secretion and inhibits glucagon secretion in a glucose concentration dependent manner. It can significantly improve the blood glucose level of patients with type 2 diabetes, and the risk of hypoglycemia is low. At the same time, somaluptide can also induce weight loss by reducing appetite and food intake. In addition, Semaglutide can significantly reduce the risk of major cardiovascular events (MACE) in patients with type 2 diabetes.

Glucagon like peptide-1 (GLP-1) agonists are considered as a class of diabetes drugs with the most market growth potential in the next few years. As a new generation of long-acting GLP-1 receptor agonist, Semaglutide has shown good clinical advantages in reducing blood glucose, weight loss, cardiovascular benefits and safety. It has also shown better effects in reducing blood glucose and weight in head-to-head clinical trials with dulaglutide. It can be said that Semaglutide is one of the best GLP-1 receptor agonists in the world.

Structure and mechanism of Semaglutide

Semaglutide has 94% homology with natural GLP-1. On the basis of liraglutide, Semaglutide has made further changes, replacing Lys at position 34 with Arg, conjugating 18 carbon fatty acid chain at position 26 Lys, and replacing ala at position 8 with 2-aminoisobutyric acid (AIB). The molecular diagram of Semaglutide is shown in the figure below. Its affinity for GLP-1 receptor is 0.38 ± 0.06 nm, and biliraglutide is weakened by three times, but its affinity for albumin is 6 times that of liraglutide, The half-life in human body is 165 hours.

On the one hand, more effective oral dosage forms can be further developed to improve oral absorption rate;

On the other hand, develop more long-acting injections, such as injections with one injection every two weeks and stable blood concentration, to prolong the action time of peptide drugs in the body.

At present, omizzur has developed a solid-phase synthesis method of Semaglutide , which reduces the difficulty of synthesis and improves the purity of crude peptide, thus reducing the difficulty of purification, improving the yield, reducing the production cost, and is conducive to large-scale industrial production. At the same time, there are custom peptide synthesis services for somalutide related impurities.

It is recommended to reconstitute the lyophilized in sterile water, which can then be further diluted in other aqueous solutions. Lyophilized is stable at room temperature for 3-4 weeks, but still should be stored desiccated below -18°C. Upon reconstitution, Peptide should be stored at 4°C out of direct light for between 10-14 days and for future use below -18°C. Peptide need prevent repeated freeze-thaw cycles.

In stock,by air or Fedex