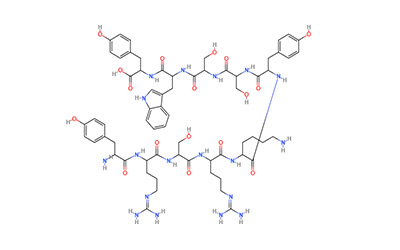 Melanin cells are distributed among the cells in the basal layer of human epidermis. The tyrosinase contained in melanin cells can oxidize tyrosine to polysaccharide, and then through a series of metabolic processes, melanin can be produced finally. The more melanin is produced, the darker the skin is; On the contrary, the fairer the skin.

Tyrosinase has a unique dual catalytic function. It is the key enzyme of melanin synthesis in organism and is closely related to human aging. Its abnormal overexpression can lead to human pigmentation diseases. Tyrosinase inhibitors can treat the common pigmented skin diseases such as freckles, chloasma and senile plaques. Arbutin, vitamin C derivatives, kojic acid and its derivatives, green tea extract, licorice extract and other traditional Chinese medicine extracts in popular whitening cosmetics on the market are tyrosinase inhibitors, which mainly inhibit the synthesis of melanin by inhibiting the activity of tyrosinase, and then play the role of whitening.

Lumixyl decapeptide-12 can inhibit the synthesis of tyrosinase, thus effectively (40%) reducing the production of melanin. To maximize the desalination of excessive pigment deposition due to melasma, freckles, age spots, sunburn, uneven skin color and light damage. And lumixyl decapeptide-12 has no other whitening ingredients such as hydroquinone toxicity and side effects such as allergy, irritation and redness.

Packing: 1 g(plastic bottle) or as you requirement

1. Peptide products include but are not limited to the above varieties,contact us by customer services: service@omizzur.com

2. Click the “ Inquiry Online ”,  fill in your product requirements in the form to get in touch with us.

3. We provide a series of quality inspection reports with the goods. Please specify If you have any other special requirements.

4. Discount : Omizzur has regular discount on wholesale quantity.Periodic and regular centralized purchasing will save a lot of transportation costs.