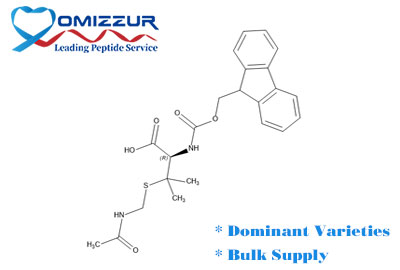 The rigidity of disulfide bridges can be increased by replacing Cys by Pen.

In organic synthesis, in order to achieve the purpose of reacting only at the position of the target group and leaving other site groups unaffected, other groups need to be protected with some reagents before the reaction and removed after the reaction is completed. Fmoc protective group is a commonly used protective agent for amino groups.

2. Fmoc-OSU is introduced into acetonitrile / water, which has advantages in the preparation of amino acid derivatives

Shipping: Deliver to worldwide by Fedex / Fedex for free shipping (A certain amount of order should be met)