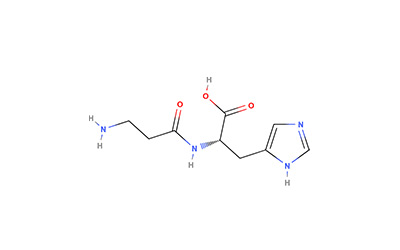 Carnosine is produced by β A dipeptide composed of alanine and histidine is a natural antioxidant. It can prevent skin aging and whiten when used in cosmetics

Skin glycosylation mainly refers to the reaction of excess "sugar" in our body with protein to form ages (a kind of glycosylated product), which leads to the yellowing and crispness of protein. Reflected in the skin area will show collagen fracture or disorder, skin relaxation, wrinkles, dark yellow.

It should be noted that the physiological phenomenon of glycosylation reaction has existed since we were born, and it has nothing to do with our age and skin texture. It is not easy for us to find its existence because of its good function in youth. As the age increases, the body's ability to renew metabolism becomes slow, and the metabolic toxins that cannot be excreted begin to react to skin problems.

Carnosine is produced by β-  A dipeptide composed of alanine and L-histidine, naturally occurring in many tissues of the body, especially in muscle and brain tissues.

Many studies have found that carnosine is an effective inhibitor of ages. Carnosine can not only inhibit the generation of ages, but also inactivate the formed ages by binding with them. Therefore, carnosine is considered to be a natural anti glycosylation substance. It prevents glycosylation of other proteins and peptides by sacrificing itself.