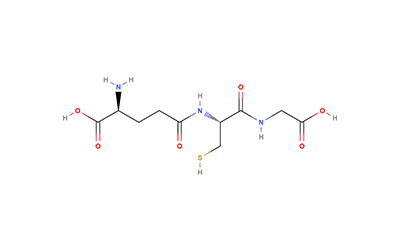 Glutathione (GSH) is a tripeptide containing sulfhydryl group, which is combined by glutamic acid, cysteine and glycine. Glutathione can help maintain normal immune system function, and has antioxidant effect, integration and detoxification effect.

Glutathione (GSH) is a kind of protein containing glutathione γ- A tripeptide consisting of glutamic acid, cysteine, and glycine with amide bonds and thiol groups, found in almost every cell of the body.

Glutathione can help maintain normal immune system function, and has antioxidant effect, integrated detoxification. The sulfhydryl group on cysteine is its active group (so it is often abbreviated as G-SH), which is easy to combine with some drugs and toxins, making it have integrated detoxification effect. Glutathione can not only be used in medicine, but also as the base material of functional food. It is widely used in functional food such as anti-aging, enhancing immunity, anti-tumor and so on.

Glutathione, as an important antioxidant in the body, can eliminate the free radicals in the body; Because GSH itself is easily oxidized by some substances, it can protect the sulfhydryl groups in many proteins and enzymes from being oxidized by harmful substances, so as to ensure the normal function of proteins and enzymes; There is a lot of glutathione in human erythrocyte, which is of great significance to protect the sulfhydryl group of protein on erythrocyte membrane from reduction and hemolysis.

Stability: stable. It is insoluble with strong oxidant.