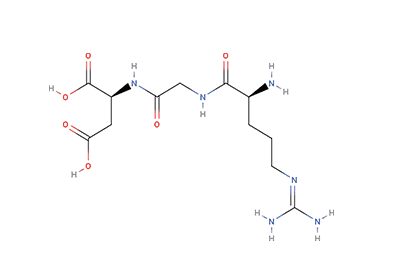 RGD peptide refers to a peptide composed of three amino acids Arg-Gly-Asp, derived from the amino acid sequence of the fiber cell attachment domain. They are the smallest recognition short peptide sequences such as many extracellular matrix proteins (such as VN, FN, FGN). The RGD peptide sequence has a wide range of biological activities and can be used for the treatment of cardiovascular diseases, osteoporosis and inflammation, and can also prevent or treat tumors caused by abnormal cell adhesion. On the other hand, RDG sequence can be used as a stimulant to promote the regeneration of damaged organs and tissues, and wound healing.

RGD peptides are expected to become effective targeted drugs for anti-tumor therapy. Integrins are highly expressed on the surface of tumor cells, and the rest are bound to extracellular matrix proteins (ECM), which can mediate tumor invasion and metastasis. The recognition site of integrin and ECM is the RGD sequence.So far, 67 proteins have been found to contain RGD sequences in the human body. These ECM proteins bind to integrins through the RGD sequence sites, thereby causing a series of physiological behaviors such as adhesion, migration, and proliferation between cells and the extracellular matrix. Exogenous RGD peptides can competitively antagonize the combination of ECM and integrins, so these RGD peptides play an extremely important role in the diagnosis and treatment of tumors.

Solubility: Distilled water for a solution up to 2 mg/ml,or we recommend using acetonitrile.

1. Please contact us through the 24-hour customer services: [email protected]

2. Please click the “Send inquiry ” ,fill in your product requirements in the form to get in touch with us.