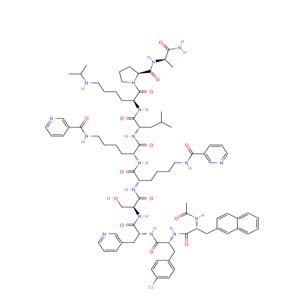 The preparation of antide acetate is as follows: firstly, the peptide intermediate is treated with appropriate mercaptan to remove the NP protective group. Then it reacted with 2-benzyl-4-carboxypyridine in DMF as coupling agent in DCC to acylate 5-orn residue. After washing, the peptide resin was treated with piperidine to remove the Fmoc protective group, and then treated with nicotinic acid and diic to acylate the D-Lys residue at the 6-position. After cleavage and HPLC purification, the GnRH antagonist was tested, and it was considered that the peptide could effectively prevent ovulation in low-dose female mammals.

For peptide demand please get in touch with our customer services center.

Shipping: deliver by Fedex or DHL,free shipping for wholesale order