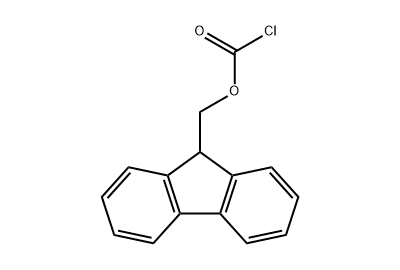 Fmoc-cl is used to prepare N-protected amino acids in solid-phase peptide synthesis; it is used to synthesize bicyclic proline analogs as an amino-protecting reagent. It can also be used as an amino acid derivative reagent for HPLC and capillary electrophoresis analysis, N-protection in peptides and oligonucleotide synthesis

Fmoc-Cl is used to protect the amino groups of various nucleosides, including adenosine, cytidine, guanosine and the corresponding 2-deoxynucleosides. Fmoc protected nucleosides can be obtained in high yield. Fmoc-Cl can also be used for hydroxyl protection, such as the protection of hydroxyl groups on sugars, etc.

Physical properties  white crystals, soluble in organic solvents such as CH2Cl2, THF and dioxane. It can react with alcohol, ammonia or amine, water

1. Please contact us through the 24-hour customer services: service@omizzur.com

2. Please click the “Send inquiry ”button,  fill in your product requirements in the form to get in touch with us.

4. After sale guarantee: Any questions please contact the customer service to complete the return or exchange process.