The synthesis of homocyclic peptides is essentially the process of forming an intramolecular peptide bond. The concentration of the reactants has a direct impact on the yield, and high concentrations can easily cause the polymerization of molecules, so the reaction generally must be carried out under highly diluted conditions. The choice of the location of the loop is also an important issue. The researcher (Cavelier-Frontin) used the synthesis of the cyclic tetrapeptide Chlamydocin as a model and used the GenMDl program to calculate, and showed that the main factors that affect the peptide cyclization are: (1) steric hindrance factors, (2) the kinetic competition of the dimerization reaction , (3) the energy level of the transition state. He pointed out that the optimal substrate concentration is the one that causes the least ring strain due to the formation of a cyclic transition state complex, so that peptides with rigid backbones are generally difficult to form a ring.

The liquid-phase method is a classic synthesis method, which is generally carried out in a highly diluted solution. The deprotected linear peptide precursor is directly cyclized under the condensation of a condensation reagent, and one end (usually the C-end) can also be activated. Then form a loop. The disadvantage of this method is that intermolecular oligomerization of peptides can easily lead to a serious decrease in the yield and purity of cyclic peptides, and the reaction often involves cumbersome side chain protection strategies.

(4) Thioester method Thioester method is a new type of cyclic peptide synthesis method developed after the 1890s. This method uses the entropy activation effect to promote the cyclization reaction without adding condensation reagents, and the reaction can be It can be completed under mild conditions and in a short time, and can obtain higher yields. The main feature of this type of method is to use the nucleophilicity of the sulfhydryl group to attack the carbonyl group on the C-terminal thioester bond from the N-terminal cysteine sulfhydryl group to form an intramolecular cyclic thioester, and then form an amide through the bond type conversion from S to N. bond to form a cyclic peptide. 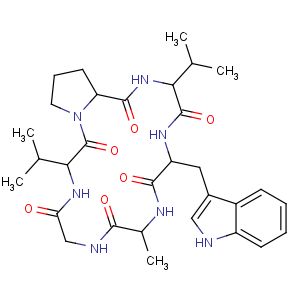