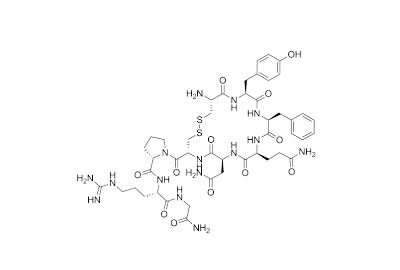 Vasopressin exists as a free peptide in the blood circulation. AVP was successfully synthesized in 1954. AVP plays an important role in regulating the reabsorption of free water, the isotonic concentration of body fluids, blood volume, blood pressure, cell contraction, cell proliferation and the secretion of adrenocorticotropic hormone (ACTH). AVP is synthesized and stored in the hypothalamus, and after reaching a certain concentration, it is transported down the nerve bundle, through the conus arteriosus to the nerve endings of the posterior pituitary, where it is released into the systemic circulation.