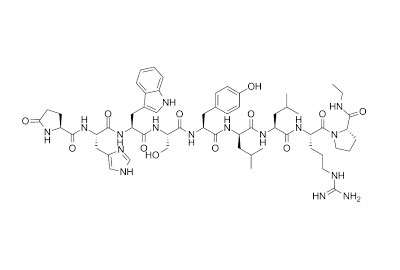 Endometriosis is an estrogen dependent disease, which mostly occurs in women of childbearing age. The menstrual cycle of patients is short. Ectopic endometrial implants will lead to inflammation, scar and adhesion, and produce symptoms such as chronic pelvic pain, fatigue, dysmenorrhea, difficult sexual intercourse, periodic bleeding, difficult urination or defecation. In severe cases, it will lead to infertility. Surgery is the first choice for clinical treatment of endometriosis, but the recurrence rate is high. Therefore, in order to improve the treatment effect and reduce the recurrence rate, drug treatment is often given after operation. The initial treatment drugs include non steroidal anti-inflammatory drugs, compound oral contraceptives, etc., and then androgens, progesterone, gonadotropin releasing hormone analogue (GnRHa) and other main stream treatment drugs are gradually developed.

Leuproline is a highly active analogue of luteinizing hormone releasing hormone (GnRH) produced in the hypothalamus. It is a synthetic water-soluble nine peptide with two ends closed. Leuproline mainly regulates endocrine to treat prostate cancer, breast cancer, endometriosis and other sex hormone related diseases. Leuproline was ineffective after oral administration, and was well absorbed by subcutaneous or intramuscular injection. At present, its sustained-release preparations are mostly used in clinic.